Gotta love the Daily Mail. When it comes to science “reporting” the Fail can make seamlessly weaving half-facts, logical fallacies, non-sequiturs and Utter, Utter Bollocks (µ²B) into a science-free, sensationalist headline seem truly effortless – and that takes real skill. And remember this is a newspaper that is so scientifically illiterate it still defends the indefensible Andrew Jeremy Wakefield.

Jump To... HIDE
Will Ebola Mutate for Airborne Spread – You Decide!
Yeah, but flu mutates, innit?
Saving the best ’til last…

[Anyone reading my ramblings who may be unfamiliar with the Fail – this site will give you a really good understanding of its position without having to sully yourself by actually reading the source material.]

As an aside, the Grauniad reported last week that reading the Fail is both addictive and possibly carcinogenic but the Fail’s readership will be untroubled by this. They’re too busy locked on the horns of the dilemma “Do we string immigrants up then send them back, or do we send them back then string them up?”… 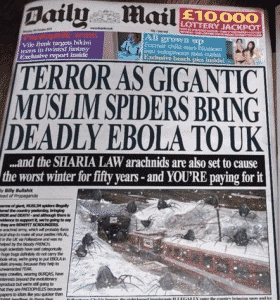 So, according to the Fail, “Experts fear Ebola virus COULD spread through the air and not just through contact with bodily fluids” and even ‘quote’ a few proper experts. I’m glad the COULD is in big shouty caps – you COULD take a dump in the Queen’s handbag, win the lottery and get a blow job from Marilyn Monroe all on the same day and – in the presence of an appropriate selection pressure and a particularly bizarre and synergistic number of mutations all happening at the same time – pigs COULD grow wings and take to the skies.

Either is as likely as Ebola changing its spots to airborne transmission. But it COULD happen. Except it couldn’t.

I’ve been interviewed by the Fail on science stories before; they ask the same question a slightly different way for as long as it takes to catch you out so you say something that supports the line they want to take. You really need your wits about you. “I’m sorry, I’m being really stupid here, can you explain that bit again so I understand it well enough to explain to our readers…” – that’s a bit like the Deepak Chopra challenge to explain consciousness. The real challenge is to explain it to Deepak Chopra.

They cherry pick quotes, take them out of context, and twist them to fit a sensationalist headline – and I assume that’s what’s happened here. Then simply confuse and conflate droplet and airborne transmission, whip it up into a frenzy of inaccurate and irresponsible bollocks and hey presto!

Ebola can be droplet-borne – if you’re nursing someone in the later stages of the disease, they cough in your face and you’re not wearing protection that’s a risk. But that ain’t airborne. The difference between airborne and droplet transmission is in the size of the particles expelled – which might sound like a point of pedantry (yeah, OK, it is) but it’s relevant and important.

Droplets are bigger than five microns in diameter and so fall under the influence of gravity within about three feet of their source – pertussis and mumps are examples. Anything smaller than that can remain in the air a lot longer – examples are diseases such as measles and tuberculosis. Flu can spread either way but most droplets are 1-4 microns across so most of the 35 million flu virus particles in a teaspoon of snot are airborne on a sneeze – so in this case gravity is kinder on them but harsh on us.

Back to our knitting. Could it happen? Science works on observation, data and consensus and all the experts in the field agree that Ebola is not spread by airborne means. There is no data to support the airborne contention plus it flies in the face of basic scientific plausibility – but when bombarded with the question “but could it…” a scientist under pressure may answer it’s technically possible because absence of evidence isn’t evidence of absence. Just don’t expect any such nuance or caveat to be reported. Ever.

But what are the odds? Back to reality…

Will Ebola Mutate for Airborne Spread – You Decide!

All in all, Ebola is a pretty stable virus genetically (so the mutations that enable evolution run at a low rate) plus there is no ‘need’ (that is, a selective pressure) in play to drive any evolutionary change in that mode of transmission. So, no mechanism, no plausibility, I grant you bats grew wings about 50 million years ago and so it’s possible pigs might someday too – but phylogenetic grounds this is more likely than Ebola becoming airborne.

Anyone who says this knows precisely bugger all about virology. Flu has a mechanism where it can mix and match genes if two different influenza viruses infect the same cell. That’s called genetic shift. Add to that the genetic drift you get because it’s really sloppy at reproduction (giving rise to minor changes in the same strain over a season) and you get a constantly changing set of viruses that every now and again throw out a pandemic-causing curve ball. Ebola never has done that because it quite simply can’t do that so it won’t do that.

So to change to an airborne virus Ebola would need to make fundamental changes to its basic mechanism of spread – which it is under no pressure to do as it’s current strategy works rather well, thank you – as well as completely re-write the laws of genetics, virology and evolution plus probably a few more I’ll think of just after posting this.

Saving the best ’til last…

The Daily Mail is also concerned that waves of ISIS terrorists are on their way to the UK as Ebola suicide bombs. Seriously. Even I couldn’t make this shit up.

But I find the Redneck Religious Right in the US far more worrying than any Jihadi. These are the lunatics who believe that creationism belongs in the science class, not the Sunday School, that the earth was created in seven days 8,000 years ago by their imaginary friend in the sky, the Grand Canyon is proof of the flood – the one where Noah put the globe’s biodiversity into a pedalo – and the devil put the fossils there to make us doubt.

I work on the premise that having a faith is rather similar to having a penis – it’s fine to have one, it’s even OK to be proud of it. Just don’t wave it about in public or shove it down my kids’ throats. But like many of those possessed of a shouty faith who claim discrimination is fine because their imaginary friend or the voices in their head told them so, it’s the Religious Rednecks shouting most loudly that borders should be closed because if it gets in Ebola will become airborne.

Nice to know I’m not the only one savouring the delicious irony such statements mean they must now believe in evolution!