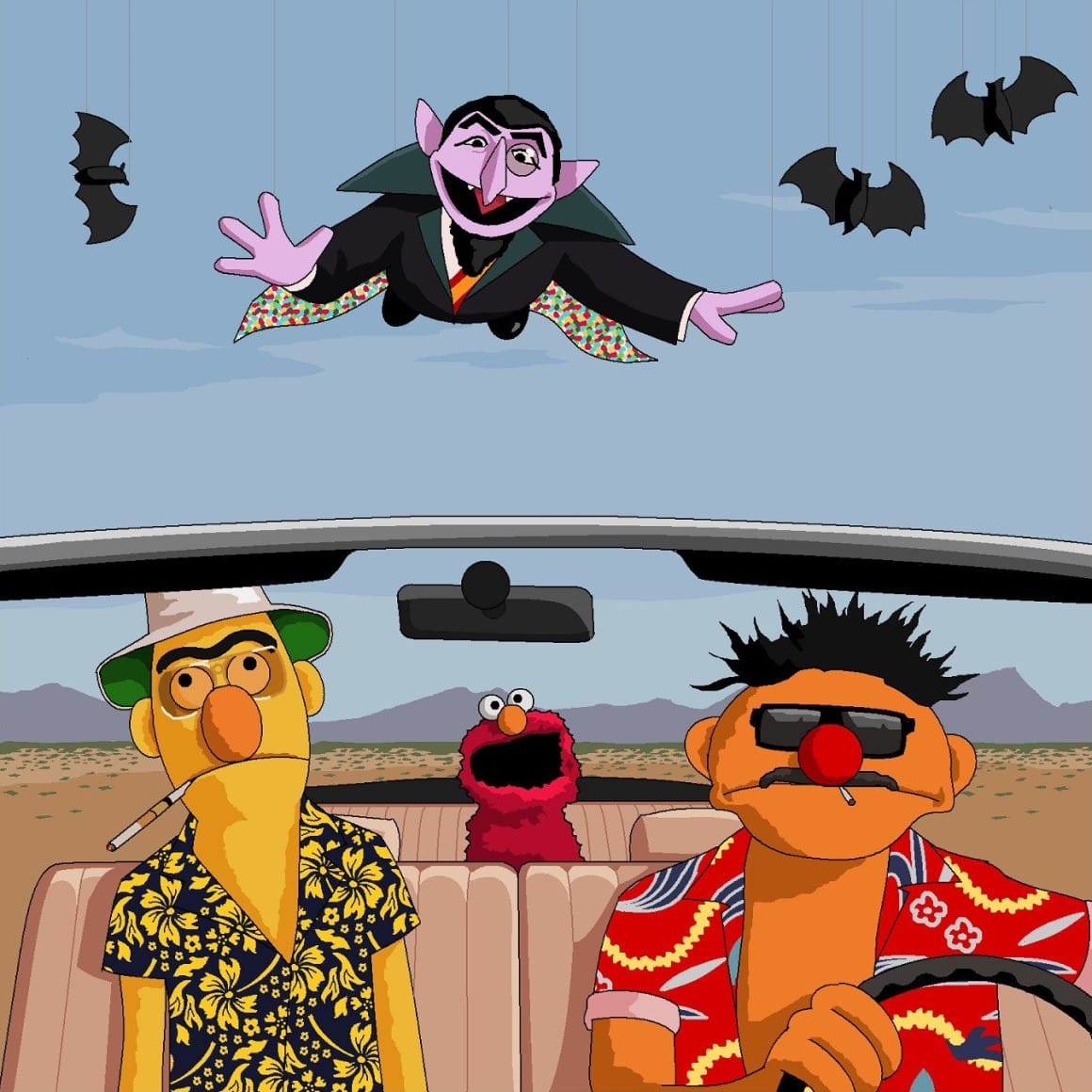 The wonderful Bat Country by Jim’ll Paint It. For Gen Xers such as me who pre-schooled on Sesame Street then graduated to Hunter S Thompson, this is a work of demented genius. Used with the kind permission of the artist.

In many cultures bats are associated with vampires, evil and death. Which is hardly surprising; they have wings and fly like birds (actually better than birds) but are mammals so they have fur. And teeth. And nurse their young – but they don’t walk on four legs. WTF? And as if that’s not enough they are mostly nocturnal, choose to live in darkness in unusual places and, well, just don’t seem to fit in with the normal order of things.

Bat apologists would point out only 3 of 13,000 species are haematophagic (drink blood – and they lap it, not suck it) and that the anticoagulant in their spit has been developed into an anti-stroke medication – but I’m a microbiologist so through my lens they’re dirty little bastards and a reservoir for at least 60 viruses known to infect humans. And it’s not just the coronaviruses; Hendra, Nipah, Ebola, Marburg – bats are almost as revolting as The Fluffy Vermin.

Anyway, the coronavirus that’s causing the first proper pandemic in 100 years shares over 96.2% of its genetic code with a bat coronavirus called RaTG13. Never heard of it? Don’t beat yourself up. It was isolated from a horseshoe bat in Yunnan in 2013. Genetically the virus was very similar to the SARS strain that made the global public health community shit itself a decade earlier.

In 2013 we knew that bat coronaviruses jumped from animals to humans and posed a pandemic threat. But there were bigger stories that year; the deaths of Nelson Mandela and Margaret Thatcher, a new Pope, a Royal birth and few people were interested in a coronavirus in China that only infected bats.

It now seems that RaTG13 underwent two mutations (or picked them up from another virus) that turned from bat virus into the killer stalking us now. So how predictable was this?

Hindsight bias or ‘creeping determinism’ or the ‘I knew it all along‘ fallacy is the tendency of people to overestimate their ability to have predicted an outcome that could not actually have been predicted at all. We all do it. And it’s rampant at the moment.

The past is always 100% predictable but as this pandemic evolves, people shout “well of course the government(s) / WHO / medics / whoever should have done X ages ago, it’s obvious“. Every armchair expert – and much of the media – is falling into this trap: as each piece of new information emerges they second-guess decisions made before something was known as if it were patently obvious at the time.

But we can apply this to the more distant past, not just to those blaming any current government response. Of course the emergence of SARS in 2003 should have prompted us into actively working on a vaccine. Of course we should have been doing more research. Of course we shouldn’t have dropped all the SARS research when we worked out people who had it were sicker than shit for 4-5 days before they started shedding virus – so rigorous isolation and contact tracing got rid of it.

As the urgency of a potential pandemic waned we lulled ourselves back into a false sense of security; so much so that the Tangerine Shitgibbon defunded the US Pandemic Response Team. OK, that was crass ignorance but if you think that’s entirely the fault of governments not taking the threat seriously enough, think again. Look at all the nonsense on social media that’s led to the resurgence of vaccine-preventable diseases and all the alt-med woo bullshit? That’s us being fuckwits, not the politicians.

Back to the microbiology. RaTG13 wasn’t capable of infecting humans but it seems two very small mutations have been game-changing. To replicate, a virus needs to do four things.

This virus binds to a receptor called ACE2. The ACE2 receptor’s usual job is to monitor signals that change blood pressure so you’ll find them on the surfaces of all sorts of human (and animal) cells – but fine control of blood pressure in the lungs is important so lung cells have many, many ACE2 receptors.

Like SARS in 2003, this coronavirus binds to ACE2 as well. But it binds loads better. The usual analogy is a key in a lock but a tiny mutation means SARS-CoV-2 can stick to our ACE2 receptors like shit to a blanket. If a virus binds really well to its receptor molecule that’s a really good start to setting off a raging infection. But binding is only step one. It still needs to get in.

There’s a lot out there about ACE2 but that’s only part of the story. Furin is a protease. Proteases chop up proteins. These molecular scissors are involved in multiple physiological processes. They don’t just digest proteins in our food, they regulate all sorts of activities and have key roles in cell proliferation, immunity and inflammation. But chopping up proteins up isn’t just to digest or remove them, often proteases convert a protein from an inactive to an active form.

Furin is involved in so many activities in humans it’s not surprising many bacteria and viruses have hijacked it for their own uses; principally to activate the proteins that get them across the host cell membrane. HIV, flu and a number of other viruses hijack furin to help in this process. And whether or not a virus is activated by furin is a good clue to how infective it might be.

Bird Flu (H5N1) is activated by furin but wasn’t so good at binding – the cells with the requisite receptor are waaaay down in our lungs and the ability of the virus to bind was OK but not stellar (in chickens the receptors are in the upper airway so they’re more susceptible). SARS was pretty nasty but it didn’t bind to ACE2 as well as this new one – and also it wasn’t activated by furin.

Bats are largely unaffected by the coronaviruses for which they are a reservoir. Which makes evolutionary sense; if the viruses killed the bats they would die out too. Also stability will be selected for so – like SARS and MERS – RaTG13 probably mutated in an intermediate host. SARS passed from a bat to a civet to humans; with MERS the intermediate host was a camel.

RaTG13 can bind to ACE2 but isn’t activated by furin so chances are it jumped to an intermediate host which was simultaneously infected with a different coronavirus which had the spike protein mutation that allowed furin activation which is what started this. This isn’t at all far-fetched; flu does it all the time. If – say – a pig is infected with different flu strains they can swap genes like molecular football cards. However it happened, SARS-CoV-2 has two killer mutations: it adsorbs to ACE2 very tightly and it’s activated by furin which helps it infect cells way more efficiently. There are other mechanisms by which it could have gained this pair of mutations – but however it happened the ACE2 / furin Turbo Nutter Bastard Coronavirus still needs to jump to a human…

The hasty assumption is that the virus jumped to humans in a ‘wet market’ in Wuhan selling live and dead animals, fish and birds: badgers, bats, pangolins, turtles, civet cats – you name it – for human consumption or use in sham medicine. I’ve been to a few of these in Asia and elsewhere; let’s just say if you’re used to hygiene standards in – say – Europe, North America or Oz / NZ it’s a bit of an eye-opener.

Which is why the idea that Ground Zero for the pandemic is one of these markets in a major travel hub just before the Chinese New Year is attractive and sounds eminently plausible. The slight embuggerance is that Patient Zero hasn’t been definitively identified so while this is a convenient hypothesis it’s not a certainty. According to The Lancet the first case had no connection to the market. A study in Nature looking at the genetic fingerprint of SARS-CoV-2 and many other strains found “undetected circulation” in humans for several months so it’s also entirely plausible it had jumped to humans some time earlier then walked into the market by an infected person. We just don’t know yet and we may never be certain.

The USA is blaming China, China is blaming the USA, the Guardian is blaming factory farming, some hoofwanking bumblecunt US evangelist is saying it’s God’s punishment of the Jewish people for opposing Jesus, one prominent Islamic scholar said it’s Allah’s judgement on China for its treatment of the Uyghurs then got it himself (twat), many others of faith are using it as an excuse for rampant homophobia, a rabbi has gone on record that it’s God’s judgement on gay pride parades and my mate Piers reckons it’s a plot by Deep State Paedo Lizard Aliens.

It is human activity that’s to blame for this but not because folks believe in the wrong Imaginary Friend In The Sky or do things with their genitalia that provokes the disgusted fascination of (usually religious) homophobic bigots.

It was us that opened this box, however.

Deforestation and the sundry other environmental damage we are causing is pushing humans and bats closer together in precisely the places these viruses tend to originate. Add to that the biological mixing bowl that are wet markets and this is what happens. So let’s just collectively dip our hands in a big bucket of shit and give ourselves a huge round of applause.

And no, it’s not some sort of Karmic Clusterfuck, it’s just biology doing its stuff. Like all viruses this one doesn’t give a shit about us, it just wants to find new hosts and replicate. And we’ve set ourselves up as a perfect breeding ground.

Just consider that bats and coronaviruses have coexisted for over 52 million years. Over that time neither the bats nor the viruses have changed to any great extent. It’s the changes we’ve made to our environment that’s set us up for this entirely predictable shitstorm.