Those crazy Kenyan bishops are at it again. Last year I wrote about their attempts to ban the WHO’s tetanus vaccination campaign on the basis they thought it was a contraceptive, not a vaccine. Which it wasn’t and isn’t. Now it seems their efforts to maintain the 100,000+ entirely preventable deaths in new mothers and newborns from tetanus in the region was just the appetiser. They recently unveiled the next course: polio.

Clearly unsatisfied with frightening children with wicked fairy tales about lakes of fire they actually want children to be paralysed, one presumes so they can no longer run away from sexual abuse by the clergy.

Without getting too much into the biology of polio it’s a virus that attacks those nerve cells in the spinal cord that connect the brain to your muscles which can ultimately cause a flaccid paralysis. Until the 1950s when the Salk and Sabin vaccines became available there were entire hospital wards full of people in iron lungs unable to move their limbs or breathe – hence the need for the ‘iron lung’ to do it for them. 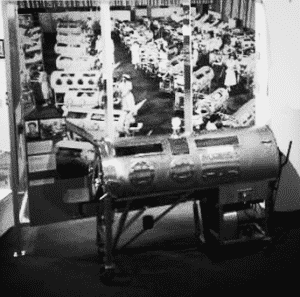 While at the CDC in Atlanta earlier this year I took some time out to look around the museum there (which is a grisly but fascinating trip I highly recommend) and saw an iron lung for the first time. When you actually see one it’s shocking to imagine what it must have been like to be imprisoned in the thing. The historic photos of these respirators don’t convey how small and claustrophobic they are.

The tragedy of all this is that polio has no non-human reservoir so – like smallpox – it can be eradicated. And we came really close to that about a decade ago until some Muslim clerics in Nigeria and elsewhere claimed the vaccine was a sterilisation plot. That trend is now being reversed but vaccination is breaking down in places like Pakistan and Syria – which brings us neatly back to the Kenyan bishops getting in on the act with their anti-science, scare-mongering bullshit.

Let’s take a look at the NPR story.

The country’s Conference of Catholic Bishops declared a boycott of the World Health Organization’s vaccination campaign, saying they needed to “test” whether ingredients contain a derivative of [o]estrogen.

So, they’re riffing on the tetanus theme again. But they get the biology sooooo wrong. No, hCG is a gonadotrophin produced in the pituitary. It’s not a derivative of oestrogen. Oestrogens are very different hormones produced in the ovaries. Get it right, for fuck’s sake. If you thought their last adventurings into reproductive biology was bad this one has an even lower level of biological plausibility:

Dr. Wahome Ngare of the Kenyan Catholic Doctor’s Association alleged that the presence of the female hormone could sterilize children.

How? Even if an oestrogen were present (for which there is zero evidence) how the fuckitty fuck can an orally-administered hormone procure sterility in children? And what about the oestrogens we ingest on a daily basis in foodstuffs? Why would they not have a similar effect? And this is coming from a gynaecologist – which shows he is either a monolithically ignorant of basic reproductive biochemistry or is deliberately misleading people. Neither is a good look. He goes on:

Vaccines can cause autism. Vaccines have been used for spread of HIV. There are some cancer-causing viruses that you’d find in vaccines. So there are lot of stories. Some of them we don’t know whether they’re true or not true.

But yes, there are ‘a lot of stories’. I’ll grant him that. But it would be more accurate to describe these ‘stories’ as wicked fearmongering because of, well, science, innit. His response:

We could debate this forever.

You can debate it for as long as you want because no amount of debate will make your position anything other than Utter, Utter Bollocks (µ²B). There is neither a shred of evidence nor any basic scientific plausibility for your preposterous and iniquitous claims.

While I will admit considerable antipathy to the catholic church for its millennia of psychological abuse, poisoning of children’s minds with hate full fairy tales about lakes of fire and telling them they are inherently full of sin, its habitual physical and sexual abuse of the most vulnerable in our society, it’s arseholes like Ngare that really piss me off. This is a medic who is allowing his zealotry and bias to condemn children to paralysis.

And this isn’t ignorance – this is not a lack of knowledge; it’s having the knowledge and choosing to ignore it in favour of a position that suits a worldview based on hatred, death and damnation. But the catholic church is and always has been founded on fear, superstition, repression and abuse with zero grounding in reality so I suppose one should not be too surprised at the wicked fantasies this idiot is passing off as legitimate medical opinion.

It is said that the current pope has ‘a respect’ for science and does not find it incompatible with his religious beliefs. That’s a whole other post, but if it is the case he should be bringing these ignorant bigots to heel. He hasn’t over their and their ilk’s other pronunciations on vaccines or HIV so my expectations remain low.

Remember this is still an organisation that seeks to control our thoughts, morals and sexual behaviour and maintains its position that having or being involved in a medically indicated abortion means instant excommunication from their club. Typical fisherman mentality: let them go when they’re little so you can fuck them up real good when they’re bigger.

So just sharing it with your friends really helps the cause.
The world is drowning in an ocean of bullshit. Please help.

This website uses cookies and third party services. They make the Internet work. If you continue to browse we'll assume you're cool with that. Settings OK