July 14th, 2014|Pseudoscience, Food, Public Health, Stupidity|8 Comments
Go to... hide
Natural vs Synthetic
Can You Spell ‘Conflict’ or ‘Of’ or ‘Interests’?
And…. Relax….

I’ve threatened to write about the Naturalistic Fallacy before; it’s a huge topic but one aspect of this fascinating cognitive bias has been doing the rounds again recently: the premise that ‘natural’ food is better than ‘synthetic’ foods or ‘chemicals’. There are several problems with this notion. One is that ‘natural’ is essentially a meaningless term; everything we eat is processed in some way or another and everything is made of chemicals. And don’t get me started on genetic manipulation; nothing we farm or eat is ‘natural’ in that we have genetically engineered plants and animals by selective breeding over millennia and now the stuff we think is ‘natural’ bears little resemblance to its wild, ‘natural’ forebears.

A recent article in the Washington Post showed US consumers buy in excess of $40bn –worth of foods marketed as ‘natural’ annually – but the term is not regulated and has neither official meaning nor scientific definition. Another problem is many ‘natural’ products have scary sounding names (to non-chemists, at least) and if people look them up and discover something is purportedly linked with cancer they assume anything containing it will kill them and should be banned. The simple fact is that everything is a toxin – but the dose makes the poison. Water and oxygen are both toxic in excess as are vitamins – they all have clinical syndromes linked with overdose as well as deficiency.

It seems a growing number of people believe that if you can’t pronounce an ingredient you shouldn’t eat it. For example would you eat something containing 3,7- dihydro-1,3,7-trimethyl-1H-purine-2,6-dione? No? You’d better avoid caffeine, then.

This notion that stuff that isn’t ‘natural’ is probably bad for you is superficially a persuasive one, but what exactly is ‘natural’? Is it the origin? Is it how much it’s processed? Vitamin C from citrus fruits and that derived artificially from glucose via an industrial fermentation process are identical. Same molecule. No difference. But apparently one should never let such facts get in the way of a good story.

The age of the Internet means anyone – even idiots like me – can now publish anything they want and build an audience. So there’s a lot of nonsense out there that is superficially plausible with no editorial filter for accuracy or utility. The only certainty when reading something on the Internet is that you have a working Internet connection. That’s all.

But when it comes to the Naturalistic Fallacy gone nuts regarding food, blogger Haari Vanni who styles herself the ‘Food Babe’ is truly in a league of her own. I have written about her bullshit before but essentially her shtick is “when you look at the ingredients [in food], if you can’t spell it or pronounce it, you probably shouldn’t eat it.” Wow.

But it gets better: She also believes microwave ovens should be banned because “microwaved water produced a similar physical structure to when the words “satan” and “hitler” were repeatedly exposed to the water [sic]” – essentially water forms malignant crystals when exposed to negative thoughts. And I thought homeopathy was as nuts as it gets.

Haari Vanni has initiated campaigns against many organisations about what they put in food – which is fine because folks producing our food should be held to account – but not by a scientifically-illiterate bimbo whose understanding of basic science as well as the subject about which she writes doesn’t amount to a fly shit in space. This self-appointed ‘food activist’ has held corporations to ransom and the scale of her scientific illiteracy is only eclipsed by her talent for self-promotion. But her total ignorance of basic biology, biochemistry and nutritional science has not prevented her building a following, all based on Utter, Utter Bollocks (µ²B). It’s difficult to chose which examples of her crass stupidity to point to on her website simply because there are so, so many. But to choose one a search for ‘Vitamin C’ – purely because I mention it above – one finds:

Lemons are anti-bacterial, have been proven to prevent viruses like cholera and provide a load of vitamin C boosting the immune system.

You can’t ‘boost’ your immune system with vitamin C or anything else. I suppose one could ‘boost’ it if one were deliberately expose oneself to an infection thus provoking the immune system to muster its various wings against the invaders, but would you deliberately infect yourself with cholera, for example? (And V. cholerae is a bacterium, not a sodding virus, you irredeemably ignorant…)

Let’s hope no-one tells her Vitamin C is ascorbic acid. OMFG!!!! It’s an ACID!!!! And can you spell ‘ascorbate’? Well, were Haari Vanni a Latin scholar (or had the slightest notion of basic biology) she may well understand the adjective ‘scorbutic’ – having scurvy – where due to lack of ascorbic acid you can’t make collagen and your face falls off. Vitamin C (or ascorbate) also has an ‘E’ number – E300 – and as we all know all ‘E’ numbers cause cancer, ADHD, autism, erectile dysfunction…

Can You Spell ‘Conflict’ or ‘Of’ or ‘Interests’?

I note she also sells many products via her website – quelle surprise – but I’m concerned she’s breaking her own rules. One of many examples is Kickin’ Kale Juice where she praises its levels of (2E,4E,6E,8E)-3,7-dimethyl-9-(2,6,6-trimethyl-cyclohex-1-enyl)-nona-2,4,6,8-tetraen-1-ol. Or to give it its trivial name, Vitamin A. But what I find particularly egregious is her statement:

The enzymes released from kale go in to your liver and trigger cancer fighting chemicals that literally dissolve unhealthy cells throughout your body.

So, not just fear mongering based on complete ignorance of the subject at hand, not just a financial interest in telling people who fear what might be in convenience foods, not just claiming that her overpriced woo foods are healthier, not just peddling Utter, Utter Bollocks (µ²B) – she’s also giving advice on treating cancer. She’s not a physician. She’s not even a scientist.

But where’s the harm? See this website that lists people who’ve died unnecessarily by ignoring medical advice and placing their faith in nonsense and unscientific woo.

Food Babe may be an extreme case but otherwise intelligent people often go to extraordinary lengths to satiate their need for all things to be ‘natural’, sometimes enduring considerable personal hardship in the process.

An example is a dear friend possessed of the kindest heart you could imagine topped with a razor-sharp intellect – whose fatal flaw is a soft spot for the Fluffy Vermin. She feeds the dog raw tripe because it’s ‘nutritious’ and ‘natural’ – and at considerable personal cost. Practicality and logistics aside, imagine the smell, the flies, the farts – and when I argue that far more of a food’s nutritional value is realised when cooked it falls on deaf ears. When I warned the magnesium in farmed chickens’ necks may send Fido’s urine pH too high and risk bladder stones she dutifully armed her husband with pH strips to check the mid-stream flow wasn’t too far north of 7 when walking the dog. The draw of ‘natural’ can so powerful it will suspend your critical faculties and force your spouse into canine watersports. You have been warned…

The whole ‘raw food’ movement are another bunch of nutters who know the square root of fuck all about basic biology – just like their fellow travellers espousing Paleo or Lycanthropic diets. But what about dogs? Isn’t it better to feed them raw foods, as ‘nature’ intended?

If we go back to the ‘natural’ state it’s true that carnivorous animals tend to go for the viscera first and eat them raw (duh!), usually starting with the stomach (why not get the benefit of your prey’s last meal as well?) whereas we tend to go for muscle meat and usually prefer it cooked. Before leaving the Fluffy Vermin (for now) it’s important to realise back in the wild when their diet was carcass du jour they barely lived to reproductive age. A generation ago domesticated dogs fed on modern pet foods lived to over ten. Now it’s closer to twenty, largely due to Fluffy Vermin Nutritional Science.

It’s been long known that cooking food does unlock far more of its nutritional value; the bioavailability of cooked carbohydrates is two to twelve times greater than their raw forms. Yes, if you put your sprouts on in November for Christmas lunch as is the habit in the UK you’ll probably leach out some of the micronutrients (like vitamins) but overall the nutritional benefit of cooking massively outweighs any minor losses. 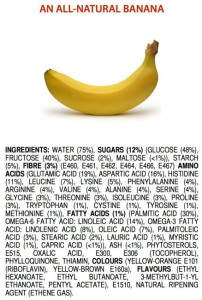 We, the chimpanzees and the bonobos split from a common ancestor somewhere in the Middle Eocene. But we learned to cook. The chimps learned to lob excrement at zookeepers and the bonobos have always been far too busy shagging to learn anything much at all. Would either have evolved to our level had they learned to cook food to unlock more nutritional value? (I do accept the argument that the bonobos’ priapism as a way of life may be superior to ours but you get my point).

Learning to cook food a couple of million years ago and unlocking that potential is the factor that hugely accelerated our development compared with other species: in the fossil record there is a very clear correlation between cooking and frontal cortex size – the energy-hungry part of our brain that deals with executive function. The brain uses around 20% of the energy we take in, and in the resting awake state, about 80% of the energy used by the brain supports events associated with neuronal firing and cycling of GABA and glutamate neurotransmitters. (For any physicists reading the brain’s energy consumption is about 25 Watts – about the same as a fridge light bulb).

I wonder if Haari Vanni has seen the brilliant posters devised by an Australian science teacher listing the chemicals using their proper names in bananas and other ‘natural’ foods – if so I’m willing to bet she will be unable to spell any of them as long as she’s got a hole up her arse. So perhaps it’s not cooking at all that propelled our brain development; perhaps it’s all those chemicals in bananas that neither she nor an infinite number of monkeys can spell that have stunted theirs?

So just sharing it with your friends really helps the cause.
The world is drowning in an ocean of bullshit. Please help.

This website uses cookies and third party services. They make the Internet work. If you continue to browse we'll assume you're cool with that. Settings OK