So, after lurking in the background since March last year (when it first jumped to humans) another bird flu out of China – H7N9 – continues to cause much comment in the meeja, some informed but mostly clueless. Cases escalated dramatically in China in the lead up to Chinese New Year – most likely due to more people travelling – and in Hong Kong bai yun feng zhao is off the menu.

Many are speculating on the potential for this strain to be a repeat the 1918 / 19 pandemic – the one that killed as many people as both World Wars combined in a single season. Could it? Conceivably. Will it? No one knows – despite the apocalypse some journalists are predicting. Don’t underestimate seasonal flu either (and I mean proper flu caused by the influenza virus) – it kills 500,000 people per season directly and a lot more indirectly.

Courtesy of the US National Archives and Records Administration

On the face of it, H7N9 looks like it could be pretty nasty as it’s quite virulent in humans (the ability to cause disease or death) and but not very infective (the ability to spread). Deaths by influenza mainly depend on the virulence of a circulating strain and pandemics such as the 1919 H1N1 were both virulent and infective. Some strains, such as H5N1 (bird flu) or H3N2 are more likely to kill (60% for H5N1) than strains like H1N1 – which was of only moderate virulence but highly infective. So H1N1 is easy to catch but isn’t as nasty as some, H5N1 is a shocker but you need to work quite hard to get infected.

OK. Back to H7N9. It hasn’t spread person-to-person much at all yet but it’s really good at infecting birds (clue’s in the name, innit) plus it doesn’t make birds too sick – so the fear is that it will spread via migratory birds as it doesn’t kill them right off. And if it mutates (and flu always does) it might become both virulent and infective. But that’s not a certainty; mutations always carry a cost and as a rule if a strain becomes more infective the likely quid pro quo is that it will become less virulent.

The biology of flu virus is relentlessly fascinating. There are horse, pig, bird and human varieties and they generally stick to their host species. One reason we don’t usually get avian strains is that the cells in our body that avian strains can bind to are few and low down in the lungs, but receptors for human stains like H1N1 are in the upper airway which is why it’s far more infective in humans. So to get an avian strain you need to be around a lot of poultry and breathe deeply.

But pigs have both receptors in abundance. So they can get a human, avian and swine flu all at once. And the flu virus keeps its 11 genes in 8 segments, not in a single sequence of RNA. So if a pig is infected with more than one strain it can mix together elements of them all. This ability to shuffle the pack (combining elements from different strains) is called genetic shift. This is how new strains emerge. And if the new strain is both virulent and infective we are in trouble. This is also the reason most new strains tend to arise in places where people, pigs and chickens live in close proximity. 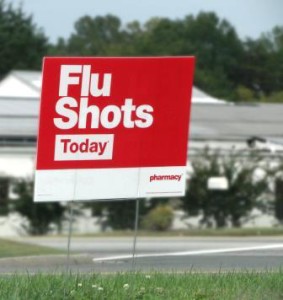 “Can I have extra Thimerosal, please?”

Yes. Ish. It’s not like – for example – tetanus which gives pretty much 100% protection. Most seasonal flu vaccines are 60-80% protective; even if all the right strains are covered in the vaccine, in addition to the genetic shift described above there is also genetic drift. This is where flu mutates slightly over a season so the H1N1 at the start of the season and the H1N1 at the end will be slightly different. It’s an RNA virus so doesn’t have the groovy stuff our DNA does to make more faithful copies. These are among the reason seasonal flu vaccines are generally not entirely protective. There is no vaccine against H7N9 yet and apparently this strain doesn’t elicit a strong immune response – which suggests there might well be technical issues in raising an effective vaccine quickly should we need one – and even then it takes nine months to get a new vaccine manufactured. (It’s grown in chicken eggs and the chicken gets a sore bum).

Drugs such as oseltamvir (Tamiflu) are neuraminidase inhibitors and so limit the severity of a flu infection rather than preventing it happening.  (The ‘H’ in a strain’s title stands for haemagglutinin – which helps the virus get into a host cell and the ‘N’ for neuraminidase – which helps daughter viruses get out. So inhibiting neuraminidase doesn’t prevent infection, it slows it down so your immune system can get stuck in).

Vitamin C doesn’t work, nor does Echinacea or any of that other nonsense. If you don’t want to get flu get a jab. Incidentally the principal strain doing the rounds in the UK right now is A(H1N1)pdm09 which – spookily enough – is one of the four covered in this year’s vaccine. The jab may not be 100% protective but that doesn’t make it 100% worthless – far from it. It might stop you getting flu – or passing it on to someone whom it might kill – like the 27% of patients who died from acquiring H1N1 in hospital. And people say H1N1 wasn’t serious. I’d want more than Jeremy Hunt’s homeopathy for this one…