Jump To... HIDE
Oh Dear…
Why a Global Pandemic is Unlikely
Why the Fuss?
So What Is It, Then?
What’s This Hazard Group 4 Biosecurity, Then? 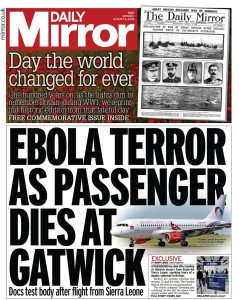 I’ve been resisting the urge to write about Ebola but I finally cracked. We’ve had the usual crappy journalism one expects of the meeja over here – see the picture – but it was that ever-reliable storehouse of Utter, Utter Bollocks – the Natural News – that actually posted a homeopathic cure for Ebola which sent me over the edge.

1. A face mask and gloves

4. An Ebola sample: some spit or other disease product, such as blood, from a person infected with Ebola, or who is suspected sick with it. Any small quantity will do, even a pinhead.

5. An alcoholic liquid, such as whisky, brandy, rum, etc.

The prize bell end that wrote this adds:

I hope you will not need to apply the information presented in this article, but if you do, it could save your life and that of a loved one.

Let’s put aside that twatting water with a leather paddle or bible is supposed to scare it into remembering stuff and all the other elements of Utter, Utter Bollocks (µ²B) that is homeopathy or that that it does not and cannot work – save for placebo effects or if treating dehydration.

The very idea of titting about with a sample containing a Hazard Group 4 viral haemorrhagic fever (VHF) is real Darwin Award -level stupidity of truly colossal proportions. This is precisely how the virus spreads like wildfire. It is fortunate the levels of literacy – let alone access to the Intertubes – is so low in that part of West Africa: hopefully this message will only get to people unable to follow its advice as their exposure risk is so low.

Natural News styles itself a non-profit organisation that wants to “empower individuals to make positive changes in their health”. Following the above advice will certainly lead to changes in your health but will only be positive if one hankers after a pretty rapid and grisly demise. Natural News is neither not for profit nor empowering anyone to make positive changes to their health, it is the mother lode of woo, quackery and charlatanism. Somewhere in its offices is a very large jar labelled ‘Tincture of Total Bollocks’ of which the writers drink deeply while pausing from fleecing people of cash.

Why a Global Pandemic is Unlikely

Yes, Ebola is massively contagious, there’s no reliable cure and it’s often rapidly fatal. It’s spread through body fluids – not droplets like ‘flu or measles – so you need contact with body fluids from someone who’s got the disease. Not someone sneezing on a bus.

It is unlikely to become a global pandemic for these reasons:

Contrast that with burial practices in West Africa – ritual body washing etc – another reason it spreads so quickly over there. According to reports relatives are breaking in to hospitals to recover the bodies of dead relatives and are blaming medical workers for bringing the disease in.

It is also helpful that if someone is infected it they aren’t contagious before symptoms appear. The fact is VHFs are so rapidly fatal that outbreaks tend to burn out pretty quickly. That isn’t the case this time probably because something else we are assiduous about over here is source isolation: if someone has it they will be detained and isolated.

Yes, this is concerning and serious. Marburg, Ebola, Lassa, Hanta – the best-known members of the Five Families of viral haemorrhagic fevers – seem to hit some particular nerve in the public consciousness. But to put Ebola in context its all-time death toll is under 5,000. Malaria alone kills 500,000 people a year in sub-Saharan Africa. H1N1 came a lot closer to being a proper plague than Ebola is ever likely to be.

I think the reason people get so het up about VHFs like Ebola is they seem to have all the characteristics of a Zombie Plague – the sort of illness where the mere touch of someone infected spreads exponentially – and causes a global pandemic due to air travel. Plus all sorts of other conspiracies: it’s a bioweapon for depopulation so the US can nick the oil combined with a plot to sell drugs and force mass-vaccination on the American Sheeple. Yes, there may be isolated cases in the developed world due to air travel but further spread is unlikely.

Zombie Plagues have been mathematically modelled but Ebola does not fit that mould: yes, careless contact with someone infected with the virus is pretty much guaranteed to pass on the infection but rapid fatality does not a Zombie Plague make. If a virus kills its host in pretty short order, provided sensible, basic infection control practices are followed it doesn’t spread.

So What Is It, Then?

I’ll stick to basics plus bits that aren’t being reported elsewhere. It’s a viral haemorrhagic fever that causes a severe and often fatal illness in humans. Its principal reservoirs are fruit bats and other bushmeat – but also pigs. People get it from bush meat then it’s passed person-to-person.

There are five species, three of which are the causative agent for human disease. One of the others – Reston – is found in the Philippines and China and can infect humans but so far as I can find no illness or death from this species has been reported to date. Many pig farmers in the Philippines are seropositive for Ebola –the Reston variety – and don’t forget pigs are also the prime mixing vessel for influenza virus too.

I reckon it’s likely pig farms in Africa might play a role in the amplification of infection due to fruit bats so there is a risk of pig-to-human transmission as a result of unsafe animal husbandry and slaughtering, unsafe consumption of fresh blood, raw milk or un/undercooked animal tissue. Among workers in contact with monkeys or pigs infected with Reston several infections have been documented in people who were clinically asymptomatic so Reston appears less capable of causing disease in humans than the other species – but the old data I can find relate to healthy adult males so no idea what it might do to the immunocompromised, for example.

Ebola first appeared in 1976 in two simultaneous outbreaks in Sudan, and in the Democratic Republic of Congo – in a village near the Ebola.

In the developing world it’s often a diagnosis of exclusion – you need to rule out malaria, typhoid, shigellosis, cholera, leptospirosis, plague, rickettsiosis, relapsing fever, meningitis, hepatitis and other VHFs. If you’ve got a lab you can use techniques like enzyme-linked immunosorbent assay (ELISA) or other antigen detection tests, a serum neutralization test, RT-PCR (reverse transcription polymerase chain reaction) or if your technique is good by cell culture. Samples from patients are an extreme biohazard risk; testing should be conducted under maximum BSL4 biological containment conditions.

What’s This Hazard Group 4 Biosecurity, Then?

So far as ‘Elf and Safety is concerned, pathogens come in four flavours.

Those in Hazard Group 1 are unlikely to cause human disease.

There are very strict procedures laid down for every aspect of handling a patient with a VHF because they are so highly contagious. There’s a special unit at the Royal Free in London where all patients with infectious diseases of high consequence (the Haz Group 4 ones) are taken. Specialist PPE, highly trained staff – all designed to stop the spread of the virus.