That echo chamber for bullshit called the Internet is generating so much Utter, Utter Bollocks (μ²B) about the Zika virus that I’m having trouble keeping up with it all. Apparently the Rothschilds, Bill Gates, Big Pharma and the New World Order have all had a hand in cooking this all up. And Monsanto too, obvs.

Jump To... HIDE
The Microcephaly Link
It’s Been Released to Kill Off the Poor / Brown People / (Insert Minority Here)
It was created in a lab so Big Pharma can make money with a cure
Vaccines, Innit…
The Rockefellers / Rothschilds invented it
Bill Gates’s Genetically-Engineered Mosquitoes
The Catholic Church is behind it!
What We DO Know

Yes, there are some data suggestive of a link between Zika and microcephaly but these are being massively overblown in the media.

Yes, Brazil has seen an unusually high number of babies born with microcephaly recently: according to the Brazilian Ministry of Health, between November 8th and January 30th, 404 babies were born with microcephaly and 17 were linked to Zika. 17 out of 404? To put it another way, 96% of these cases occurred without the mothers having been exposed to the Zika virus. It isn’t clear whether they used PCR or serology to determine this – if it’s serology that too could heave an impact: there will be false positives in there because Zika antibodies will cross-react with other flaviviruses such as dengue or West Nile.

But that’s not all: incidence of microcephaly has been rising in Brazil since 2012, two years before Zika is thought to have arrived. We need to remember microcephaly can be also caused by a number of other infectious agents: syphilis, toxoplasmosis, rubella, cytomegalovirus and herpes to name a few.

In Colombia over 3,000 pregnant women tested positive for Zika, yet no cases of microcephaly were reported. Ditto Nicaragua, Chile, the Dominican Republic and El Salvador – no microcephaly.

Also Zika has been around since at least the 1950s but so far it has never been found to correlate with birth defects. That’s not to say there isn’t a link but a connection between Zika and the increase in microcephaly still needs to be confirmed and other causes need to be ruled out. The WHO seems to be using the notion of ‘guilty until proven innocent – which is fine, they’re just doing their job – but it’s a lot more complex than it appears in the media.

Given its lack of virulence it’s not going to control any population in and of itself. If you want to kill people off you need a means to do it that actually – errrrr… kills people. Granted, microcephaly can be fatal and I’m not suggesting for a moment any such death isn’t tragic, I’m just saying the numbers are small.

Also there’s nothing to suggest it affects fertility either in those infected – so it’s not going to limit populations that way. And are people more likely to abstain from sex in affected areas? I doubt it.

Oh, and don’t forget, God loves the poor. He made enough of them…

There was a recent paper showing how conspiracy theories rapidly collapse under their own weight – and the more people involved, the faster it happens.

Rather like the ‘there is a cure for cancer that is being suppressed‘ trope, essentially many separate teams of scientists would need to falsify all manner of data, then somehow suppress all reports from other teams trying to replicate the falsified data. That’s an awful lot of work – and such a grand conspiracy would soon be revealed. Of course, conspiracy theorists will tell you that’s just further proof of the scale of the conspiracy. The paper in the link is well worth a look, by the way.

Unsurprisingly the anti-vaccine nutters have jumped on the Zika bandwagon too. It is true that the Tdap vaccine (used to prevent diphtheria, tetanus and pertussis in pregnant women) was introduced in Brazil just months before the Zika virus outbreak and so – well, obvious innit – the vaccine must be the cause of the outbreak.

That there is a ton of data showing that Tdap has been administered to millions of women without ill effect is irrelevant to the pro-disease nutters.

That there have been big studies in the US comparing the health of thousands of pregnant women who had the vaccine compared to those who didn’t which show no increase in any of the things that can go wrong in a pregnancy – including birth defects is clearly a conspiracy.

And that linking Tdap with Zika shows a monolithic ignorance of basic science cuts no ice either, such is the power of the Dunning-Kruger Effect.

The Rockefellers / Rothschilds invented it

Aside from the obvious question – “Why?” – this seems to have arisen because the virus (like most microorganisms)  is registered at the ATCC, an organisation that stores all manner of bugs for geeks like me to call off for research purposes.

The virus was deposited at the American Type Culture Collection (ATCC) in 1953 by Dr Jordi Casals of the Rockefeller Foundation Virus Laboratory. The original source was isolated in 1947 by scientists working for the Rothschild Foundation – who isolated it from the blood from experimental forest sentinel rhesus monkey in Uganda.

Registering an organism with a type collection such as the ATCC is not the same as a patent or copyright. Far from it. It’s just a catalogue entry from the organization whose mission is the acquisition, authentication, production, preservation, development, and distribution of standard reference microorganisms, cell lines, and other materials to the scientific community.

There is a company called Oxitec that is partly funded by the Bill and Melinda Gates Foundation. Among their projects is the release of genetically-engineered mosquitoes. To put it simply, you genetically engineer the males to be sterile. This has real potential to be an effective means to control mozzies – and the diseases they carry, including Zika.

It has been claimed there is a correlation between the release of these mosquitos in Juazeiro in Brazil and Zika outbreaks. 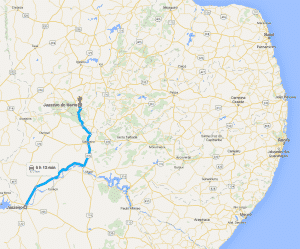 The problem is – apart from it being Utter, Utter Bollocks (μ²B) – they get the wrong Juaziero. The outbreak was in Juaziero del Norte, the mozzies were released in Juaziero City, over five hours’ drive away. And mozzies are very territorial (they don’t stray far) and have never been observed driving a car.

Oh, and only female mosquitos bite. Not males.

The Catholic Church is behind it!

This one I find far more credible. Latin America has nearly half a billion Catholics – or getting on for half of the world’s Catholic population. Despite a fall the number of adults who identify themselves as Catholic over recent years (from 90% to 60% since the ’60s) the church still exerts a massive influence on social attitudes and public policy.

Especially anything concerning the sexual habits of its flock.

In many of the countries affected access to contraception is limited, education poor and abortion is banned. Some do allow limited exceptions (rape or incest, for example) but in countries such as Chile, the Dominican Republic, Honduras, El Salvador and Nicaragua there is a total ban. In El Salvador women have been jailed for losing a baby.

Some countries are side-stepping their medieval stance on reproductive rights by encouraging women not to get pregnant for up to two years. Given the majority of pregnancies there are unplanned and the simple fact that people actually like having sex mean this approach is pretty much doomed to failure.

Incidentally, one aspect of this complex argument I don’t buy is that bans on terminations encourage dangerous, backstreet abortions. Were that the case we should have seen a decrease in female mortality due to complications from abortion since Roe vs Wade in 1973. There was none. I’m also not suggesting any woman exposed to the virus should automatically have a pregnancy terminated. I just think women should have that choice removed by the state or the church.

What We DO Know

The disease is not that serious – it causes mild, flu-like symptoms in 20-25% of folks infected and the vast majority don’t even notice. Which is a bit of a problem because asymptomatic carriage does tend to help wider transmission. Look at West Nile virus; in less than a decade it romped across the USA via the Culex mosquito (admittedly with some help from our avian friends but you get the idea).

Many thought chikungunya would be the next one to follow West Nile, marching across the USA in pretty short order but it looks like Zika might beat it. And Aedes has spread to all continents including Europe and North America so given the other diseases it carries we have more to worry about than just Zika.

The data thus far suggest this is a mild illness that will almost certainly spread. It seems there may well be a correlation with microcephaly in babies born to infected mothers – but we just don’t have the data yet. And correlation is not causation.

But despite the low risk, the panic Zika is causing is immense. It has some parallels with Ebola in that the fear it is causing is disproportionate to the risk (Zika can and possibly will spread rapidly but isn’t life-threatening, Ebola is truly horrible but the rapid death it usually brings is one of the many reasons militating against its potential to cause a pandemic).

But nature abhors a vacuum and the influence of the church on the panic Zika is provoking should not be understated. In countries such as Brazil the conspiracy theory nutters on the internet will not have as significant an influence on people’s perceptions and behaviours, as will the medieval superstition spouting from every pulpit.

And let’s face it, the Catholic Church does not have a good record when its entrenched hatred of women and gays manifests itself in matters involving disease or sex. I’ve written before about crazy vaccination bans by African Bishops and other horrors, but don’t forget the impact of the church’s long-held antipathy to condoms and the spread of HIV/AIDS, especially in Africa.

Add to that the church’s horror of menstrual blood, collectivization of guilt aimed at Eve and by extension all women, its disgusted fascination with men who have sex with men (unsurprising given so many of them seem to have joined the clergy) so I for one can’t see much enlightenment on the horizon for Zika, certainly in Latin America.